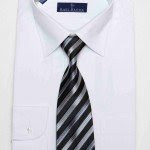 ... that often. They just don't appeal to or look good on me. How far back this aesthetic concern goes in my life I am not sure. Perhaps its only as recently in my life timeline as returning from my mission. Every day from dusk until dawn a missionary wears white shirts and ties, if not suits, as a servant of the Lord. Like any uniform, after the official reason for its use ends it feels good to change into something else. No reason to wear a drab color when there are so many other choices. The reason I don't like to wear white shirts might sound shallow, and there is truth to that consideration, but tastes are not always complicated.

Part of my personality is less than white shirt and tie compatible. From an early age I have been an artistic minded person. My most distinct youthful memories include drawing or coloring on whatever piece of paper crossed my path. As an example, on Saturdays after cartoons there was a classic monster show that came on one of the channels. Giant monsters were my favorite. One of those was a giant tarantula that terrorized the American foothills of some unnamed geography. Having at the time fallen in love with the show the first viewing, I put that fandom down in art. Not just any old picture would do for my enthusiasm. No, I drew and colored (for a black and white film) the basic storyboard of the movie's events. In the mind of that young boy sitting half the Saturday doing his creation, he was writer and director of a remake. White means fill the space up with shapes and colors.

My favorite colors are red and blue, but have nothing to do with the flag of the United States because white is missing from that lineup. No nation that I know uses those color combinations for a flag without having some tinge of white. I often in my everyday attire use black as opposed to white as my neutral color. Never would I choose to wear a black shirt to church even if a black tie is personally acceptable. I want to look good, not make a statement. The majority of dress shirts I own are shades of blue, followed ironically by white that seldom get used and then an assortment of others.

Wondering if my preference for wearing other than white made me stand out, for a couple Sundays I looked around my ward. Needless to say almost all the men had a white shirt and tie. A lesser number wore, including all leadership, a suite. Without making any kind of judgement, a heavy set person was more likely to wear a colored shirt of some kind. Those very few who were not physically larger and didn't have white on had a known independent streak. For the record, I am far from large and only tangentially related in temperament to the others. I have always been more strange than independant minded.

Of course, my dislike of white shirts doesn't translate into absolute. A religious person of the Western tradition cannot get away from the formal requirements of wearing them. Even more so a Mormon where white represents purity in particular observances. My preference will not get in the way of faithfulness, worship, and obedience. When a white shirt, and for that matter all white clothes, matters then personal proclivities go to the wayside. Temple attendance is too easy a target of this disregard. More to the point, I would never pass the sacred sacrament without wearing a white shirt and tie.


May I suggest that wherever possible a white shirt be worn by the deacons, teachers, and priests who handle the sacrament. For sacred ordinances in the Church we often use ceremonial clothing, and a white shirt could be seen as a gentle reminder of the white clothing you wore in the baptismal font and an anticipation of the white shirt you will soon wear into the temple and onto your missions. That simple suggestion is not intended to be pharisaic or formalistic. We do not want deacons or priests in uniforms or unduly concerned about anything but the purity of their lives. But how our young people dress can teach a holy principle to us all, and it certainly can convey sanctity. As President David O. McKay taught, a white shirt contributes to the sacredness of the holy sacrament (see Conference Report, Oct. 1956, p. 89).

That same goes for leadership or representative callings. Missionaries go out into the world and preach. They are a symbol of the Church and the Lord's gospel, and therefore what they wear is itself a symbol of them as messengers. Likewise, a position in the Bishopric or Stake Presidency carries a sacred responsibility. Mormonism doesn't have any official vestments for both practical and theological reasons, but business attire comes closest to a gesture of the calling's importance. There is cultural reasoning for sure, but that is not entirely the case.

Until and unless there are religious reasons that present themselves, I will continue to not wear white other than once every two months or more. That doesn't make me or anyone else who does the same a bad person. Another orthodox member of my ward is also not a white shirt kind of guy. It just makes me an individual. But, when it matters I put down my style of dress and put on white without protestation. It is the simple sacrifice I pay on occasion for my faith and beliefs.
Posted by Jettboy at 6:47 AM

"President David O. McKay taught, a white shirt contributes to the sacredness of the holy sacrament."

Did he say it only applied to passing the sacrament? Because when I partake of the sacrament, I am participating in the ordinance as well, and would like it to be as sacred as possible.

My husband and I discuss this often. He is the obedient kind, has always worn a white shirt and suite and always will. I try to explain to him that most of it is cultural tradition and not doctrine. There are great symbolic reasons to wearing the white shirt, especially for those times when men are representing a member of the Godhead and in the temple when our dress is symbolic of what we desire to become through repentance and the power of the atonement, but I see the wearing of white shirts as "tradition" and expectation, and nothing more. I have particularly become more aware of this issue as I have studied energy profiling, started to "dress my truth" and my husband and son also are doing this. They are lucky they are type 4 and type 1 which both can wear white, but I feel sorry for the type 2 and type 3 male that really do not look their best in white, it ages them and drains them, how horrible they must feel to always have to wear white and they don't even know the difference. I am a type 2 and I feel so uncomfortable in true whites, that even in the temple I feel awkward and uncomfortable.

Middle-aged Morman Man, I would ask are women not sacred because they are not wearing a white shirt? As partakers of the sacrament it is our hearts that is what is important, not our outward clothing. The poorest of person can make the sacrament a sacred ordinance in their humble clothing and the richest person, dressed in a white shirt can make it a mockery if they are not repentant and proud. Our clothing can help in regards to how we come to worship by the degree of respect we show our Father in Heaven, and we do that by wearing our best. If our best is a perfectly clean, ironed white shirt wonderful, but if it is a tattered piece of sackcloth and all we have, I don't think the Savior cares. What he cares about is that we come to the Lord's supper with that desire to be clean and pure.

I laughed when I read what you said about the tarantula movie. I saw that when I was five, with my older sister, and it terrified me. I kept trying to hide under my seat, and she kept laughing and pulling me back up to the chair. It would never have occurred to me to react as you did, but you came from a background of far more sophisticated special effects. As for the white shirt - it is an outward symbol, but the Lord knows at all times what's in our hearts. At some point, you may change your mind. Or you may not. At all points, the Lord knows you. =)

Just because Carol Tuttle has declared a typology of color "types" doesn't mean it's true.