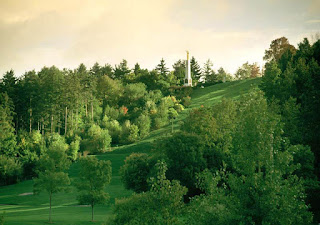 Thought of doing a project where I present places of LDS Church history in pictures. This post will focus on the Birthplace of Joseph Smith Jr. He was born on Dec. 23, 1805 on the town line of Sharon and Royalton, Vermont. A white granite obelisk marks the general area of his birth as a memorial.

All of the General Authorities of The Church of Jesus Christ of Latter-day Saints are important witnesses of the Savior Jesus Christ. Many people have a "favorite" they like to listen to and get the most out of their talks. Over the years there are some that I also seem to pay attention to more than the others as personal preference. This post will list those Apostles of the Lord, briefly comment about them, and link representative talks. Names are restricted to those alive during my lifetime and distinctly remember. Prophets are in a class of their own, so they will not be mentioned even before becoming President of the Church. It is so wonderful that technology makes it easy to go back and once again read or listen to their words.

To increase the problem is the concern expressed in my previous post about the Age of Reason. Despite stories of ghosts, bigfoot, UFOs, and the persistence of astrology still printed in newspapers, miracles of the religious kind are a bridge too far in Western society. Throw in a physical object where its existence, if not the miracle, cannot be refuted and skepticism becomes scorn. Even believers wince at a small, brown, and smooth stone once used to commune with the Divine. Throw in a funny old hat and there seems nowhere else to go but ridicule. What is that you say? Oh, don't mind my rabbits foot keychain or lucky horseshoe. No one really believes in those kinds of things anyway.

What the LDS Church Really Says about Reading Anti-Mormon Literature

Those members less inclined to know the history of the LDS Church, especially the more complicated parts, express concerns that they were told to keep away from reading non-faithful material. They claim to have been taught to always turn to Church sanctioned material only and avoid non or anti-Mormon literature. No doubt there has been warnings of the harmful effects of the less than official sources, but an outright ban is a misreading of many lessons taught. The message isn't always clear because opinions on just how to approach anti-Mormonism is mixed. There is no one single set of standards how to engage or respond. What is consistent over the years is the warning and how to be careful.

Learning is an essential part of growing in the Kingdom of God. The subject matter that we should focus on is very wide. We read in Doctrine and Covenants 88: 77-80 how open:


77 And I give unto you a commandment that you shall teach one another the doctrine of the kingdom. 78 Teach ye diligently and my grace shall attend you, that you may be instructed more perfectly in theory, in principle, in doctrine, in the law of the gospel, in all things that pertain unto the kingdom of God, that are expedient for you to understand; 79 Of things both in heaven and in the earth, and under the earth; things which have been, things which are, things which must shortly come to pass; things which are at home, things which are abroad; the wars and the perplexities of the nations, and the judgments which are on the land; and a knowledge also of countries and of kingdoms— 80 That ye may be prepared in all things when I shall send you again to magnify the calling whereunto I have called you, and the mission with which I have commissioned you.

Taken in its literal reading, there is nothing to be avoided in pursuit of truth. Of course, that doesn't mean everything we learn about is true. Discernment is part of gaining the wisdom necessary for spiritual and intellectual growth. It is the line between reading and analyzing that the LDS Church wants the members to recognize.

When I first paid attention to my own faith, the questions were almost overwhelming. My heart had already decided that Joseph Smith was a prophet of God and the LDS Church the authorized organization for the Kingdom of God. My teenage intellectual side was not so willing to leave it alone just because the Spirit spoke peace to my soul. I wanted to understand. Knowing my father was a history teacher, he would be the primary person I would go to when I had questions to find answers. For a short time he put up with my pestering and helped.

One day he must have been too busy or felt tired of my constant questions. He looked at me and then pointed his fingers at a bookshelf. I come from a reading family. My house growing up was filled with books and even now my home contains a few full bookshelves. His message was clear; go do your own research. Most of our books were faithful, but I did run into an anti-Mormon pamphlet tucked away that troubled me. However, it was not what it taught that bothered me, but that I had read the material quoted and found it out of context and a false interpretation. From then on I knew there would always be more than one side of the story and therefore should not fear discussion of them all.

Sadly, too many don't go beyond church material because of a false idea nothing else is acceptable. When they do decide to read other literature it is a surprise to them, often spiritually damaging because of a self imposed ban. It becomes more complicated because they haven't learned to check the sources or counter responses. All of this built on a misunderstanding through mistaken interpretations of what the Church teaches about learning outside official publications.
Read more »
Posted by Jettboy at 8:06 PM 2 comments: