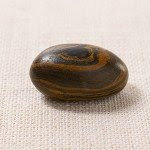 To increase the problem is the concern expressed in my previous post about the Age of Reason. Despite stories of ghosts, bigfoot, UFOs, and the persistence of astrology still printed in newspapers, miracles of the religious kind are a bridge too far in Western society. Throw in a physical object where its existence, if not the miracle, cannot be refuted and skepticism becomes scorn. Even believers wince at a small, brown, and smooth stone once used to commune with the Divine. Throw in a funny old hat and there seems nowhere else to go but ridicule. What is that you say? Oh, don't mind my rabbits foot keychain or lucky horseshoe. No one really believes in those kinds of things anyway.