"The fundamental principles of our religion are the testimony of the Apostles and Prophets, concerning Jesus Christ, that He died, was buried, and rose again the third day, and ascended into heaven; and all other things which pertain to our religion are only appendages to it. But in connection with these, we believe in the gift of the Holy Ghost, the power of faith, the enjoyment of the spiritual gifts according to the will of God, the restoration of the house of Israel, and the final triumph of truth."
-- Teachings of Presidents of the Church: Joseph Smith, (2011), 45–56.

"Jesus is the first begotten from the dead, as you will understand. Neither Enoch, Elijah, Moses, nor any other man that ever lived on earth, no matter how strictly he lived, ever obtained a resurrection until after Jesus Christ’s body was called from the tomb by the angel. He was the first begotten from the dead. He is the Master of the resurrection—the first flesh that lived here after receiving the glory of the resurrection."
-- Teachings of Presidents of the Church: Brigham Young, (1997), 272–78.

"When Jesus came, He came to do a work in many particulars similar to that in which we are engaged, and when He got through with His work here, He stood as the Savior of the world, and of the human family. He came to preach the Gospel to the poor, to open the prison doors to those that were imprisoned, to set them at liberty, and to proclaim the acceptable hour of the Lord, etc. This was a work connected with the people who lived at the time of the flood and were destroyed and kept in prison until the Lord should see proper to extend manifestations of His mercy to them. Hence, as we read, “Christ hath once suffered for sins, the just for the unjust, that He might bring us to God, being put to death in the flesh, but quickened by the spirit; by which also he went and preached to the spirits in prison: which sometime were disobedient when once the long suffering of God waited in the days of Noah.” [See 1 Peter 3:18–20.] He having finished His work upon earth for the living, went and performed a work for the dead; as we are informed, “He went and preached to spirits in prison that had sometime been disobedient in the days of Noah.

It is reserved for us to do a work for those who have passed away who have not obeyed or had the Gospel in their lifetime. We are here to do a work connected with the redemption of the dead. When the Temple was commanded to be built in Nauvoo, after the Temple had been built in Kirtland, and after so many keys had been turned, and after so many manifestations, visions and ministrations had been had, yet it was said then that there was not a place upon the earth in which to perform the ordinance of baptism for the dead, and Joseph was commanded to build a house for that purpose."
-- Teachings of Presidents of the Church: John Taylor, (2011), 182–90.

The Story of Noah and the Scriptures 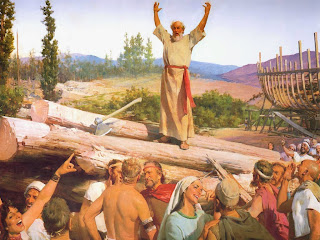 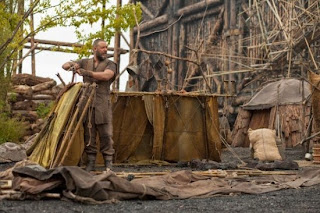 Everyone is talking about the new Noah movie, wondering if its better described as anti-Christian or pure entertainment. The movie collector of critical ratings Rotten Tomatoes has it in the mid 70 percent for critics and in the 40 percent for viewers. The box office has mixed audience result with a respectable showing of over $40 million during the opening weekend. Movies might give promise with such high earnings, but they live or die in the second and following runs. If word of mouth continues to be negative among the most interested possible viewers (Christians), then curiosity and lack of competition gave it the first boost of money. There is far from any guarantee it won't turn out a bomb. Muslim nations have already given it the banned treatment.

What is supposed to be so bad about the Noah movie for those who don't like it? For starters, it is considered way too off story from the Bible. Noah is in it, an ark with animals is present, and a flood happens. Besides that, according to negative critics, nothing else is close to correct or even the spirit of the account. He ends up a jumble of crazy, environmentalist, near abortionist, murdering anti-hero. Not even believers would protest an intervention to have him committed. The bad guys are morally questionable, but mostly a bunch of industrialists who like to hunt and eat meat. A critic from the science fiction blog io9 tried to make a case for its spiritual pedigree, but made things unintentionally worse for those Christians who would be the most unconvinced. They would see too much para-Biblical references over the very short Bible narrative.

This brings up the question of what the Noah story really is in the Biblical account. At first I was going to do a bunch of quotes and then solemnly explicate the text. That would be the traditional way of writing a blog argument. An equal concern is if there is enough in the Bible to make a story worthy of a two hour night at the movies. This is as much about creativity and imagination as bad exegesis. Those who support the Noah treatment point to The Ten Commandments for an example of making things up that aren't found in the text. True enough, as I have my own criticisms about how Moses was portrayed in rather white washed fashion after his conversion. There is a difference because much of what is in the text became part of the film. Not so much, apparently, the Noah movie.

I am going to write a story outline using what can be known from the Bible, Book of Moses and other JST, Book of Jubilee, Book of Enoch, and a small amount of commentary. The end of the story will have a reference list for those who want to check sources and decide for themselves. The intended outcome should evidence that there is enough in the text to make a great film without complete distortion. Obviously it will be from what an equally controversial Mormon point of view. Those who have watched the Hollywood version can decide how close this is to what they saw on screen.