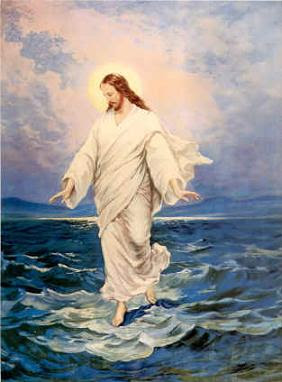 When contemplating the life and teachings of Jesus, there is no way to ignore the many miracles he performed – even if his death and resurrection are put aside. Each Sunday the Communion/Sacrament commemorates the glorious miracle of the Atonement in our faith. Perhaps because Jesus is already seen as the Savior not as much attention is paid to the miracles during his ministry. Yet, the gospel writers all included several illustrations of his power over Satan, Nature, and even Death long before his glorious act of salvation for the human race. They were included because the miracles demonstrated more than simple awe inspiring spiritual strength. Each of them pointed to his identity and mission.

Before the meaning of the miracles can be discussed, it is important to note that Jesus was perhaps best known as a miracle worker almost as much as a teacher. In fact, his first notable introduction as something special came during a family wedding party where he turned water into wine. His critics pointedly questioned when and to whom he did his miracles, without denying he did them. John, independent of the other Gospels, even implied that it was the miracle of raising Lazarus that angered the Jewish leadership enough to plot against his life. A contested reference to Jesus by Josephus includes the fact of his miracles even in a stripped down "non-Christianized" version:

At this time there appeared Jesus, a wise man. For he was a doer of startling deeds, a teacher of people who receive the truth with pleasure. And he gained a following among many Jews and among many of Gentile origin.

Very few who study the Historical Jesus reject that Jesus was known for his miracles. There are too many layers of text and tradition to conclude his "startling deeds" were inventions of the writers. A pattern of types of miracles emerges that none of the Gospels seem to deviate from. Embellishments like the Childhood stories such as creating a living bird from clay are not present. From an essay at the site Christian Origins we read:

[W]e note that Jesus as exorcist, healer (even to the point of raising the dead), and miracle worker is one of the strongest, most ubiquitous, and most variously attested depictions in the Gospels. All strata of this material--Mark, John, M-traditions, L-traditions, and Q--make this claim. This sort of independent multiple attestation supports arguments for the antiquity of a given tradition, implying that its source must lie prior to its later, manifold expressions, perhaps in the mission of Jesus himself. (Paula Fredriksen, Jesus of Nazareth, King of the Jews, p. 114)

Examined for its sources, therefore, the New Testament provides no fewer than five independent sources attesting to Jesus' miracle working.

Because Jesus was so strongly associated with miracles, it would not be surprising he used them to make some dramatic statements. Most of them fall into a select group of categories. They include exorcisms, controlling nature, healing of physical illness, and bringing back the dead. When a group was sent by John the Baptist to determine who Jesus was, it was his miracles that were used to define the answer. They were signs of the approaching salvation John the Baptist preached so much about:

1 And it came to pass, when Jesus had made an end of commanding his twelve disciples, he departed thence to teach and to preach in their cities.

2 Now when John had heard in the prison the works of Christ, he sent two of his disciples,

3 And said unto him, Art thou he that should come, or do we look for another?

4 Jesus answered and said unto them, Go and shew John again those things which ye do hear and see:

5 The blind receive their sight, and the lame walk, the lepers are cleansed, and the deaf hear, the dead are raised up, and the poor have the gospel preached to them.

6 And blessed is he, whosoever shall not be offended in me.

As noted, the first recorded miracle, as far as the text states, was turning water to wine during a family marriage ceremony. His mother became concerned because the wine used during the party had run out. Seeking help from her son, Jesus gave in to her pleadings and had the flasks filled with water. It was with gratitude and surprise that the water became an abundance of wine for the guests to drink. There are perhaps two significant meanings behind this act. The first is that Jesus had purified the water in a way that is reminiscent of the later drinking of the sacrament in remembrance of his death. This would be reinforced by reflection on the second miracle of Moses, the turning of the water into blood in Egypt. However, unlike the stink of putrid waters, his water into wine was for celebration and refreshment.

The feeding of the 5,000 was equally tied to Jesus as a Moses like prophet come to deliver the nation of Israel. During one of the longer days of preaching, a multitude became hungry and wished to eat. The large size of the gathering made it near impossible to feed the whole of them. Apparently the people didn’t bring their own food. Noticing the stressful situation, Jesus asked for a gathering of fish and bread. He soon prayed over the food and handed it out until everyone had eaten. The meager amount of food had become a banquet feast on a lonely hillside. Some of the significant parts of this story sound very much like Moses and the Children of Israel during their deliverance from Egypt. Jesus first crosses the Red Sea, then gathers everyone together to teach the Law. In a moment of hunger they are fed as if manna and quail had come from Heaven. Jesus in effect declared himself the next great prophet and deliverer. It is no wonder that so many turned away from him when they realized what this meant. It had created a crisis of faith to determine who would follow him and who would not.

More amazing than a declaration of Jesus as a Moses like prophet, and perhaps Israel’s messianic deliverer, was what calming the sea might have meant. After a day of teaching the multitudes, Jesus requested leaving to the other side of the Sea of Galilee in their boat. A violent storm raged and the disciples became frightened. They woke Jesus up and begged for his help. To answer their fears, he rebuked the wind and waves until they had stopped. He questioned their faith and they his identity. As familiar as they were with the Scriptures, it would be easy for them to recall another instance of a storm calmed at sea. This one is from Psalms 107: 23-32:

23 They that go down to the sea in ships, that do business in great waters;

24 These see the works of the LORD, and his wonders in the deep.

25 For he commandeth, and raiseth the stormy wind, which lifteth up the waves thereof.

26 They mount up to the heaven, they go down again to the depths: their soul is melted because of trouble.

27 They reel to and fro, and stagger like a drunken man, and are at their wits’ end.

28 Then they cry unto the LORD in their trouble, and he bringeth them out of their distresses.

29 He maketh the storm a calm, so that the waves thereof are still.

30 Then are they glad because they be quiet; so he bringeth them unto their desired haven.

31 Oh that men would praise the LORD for his goodness, and for his wonderful works to the children of men!

32 Let them exalt him also in the congregation of the people, and praise him in the assembly of the elders.

For more on the meaning of Jesus’ Miracles, visit the presentation at BBC on the subject. These are not, of course, the only Miracles with significance beyond the nature of the act. Hopefully as we study the New Testament our eyes can be opened to our Saviors’ mission. It is not enough to simply recount the awesome wonders he performed. He wanted us to follow him and increase our faith. In a world with seemingly so few miracles it would not be surprising if Jesus rebukes us for not facing the storms of life. With Christ’s help we can become our own miracle workers. That is, as soon as we stop disbelieving in miracles and increase our faith in the gospel of Jesus Christ.

Your interpretational take on John 2 is interesting. I would like to interact a little with this after the holiday.

Btw, Have a Merry Christmas.

It was something I thought of while trying to understand why it was the first public miracle. I actually almost did a post on just that incident. Perhaps I will share my notes on that after all.

What caught my eye was the opening part about communion / sacrament. I am LDS so to me sacrament is a SYMBOL of Christ's sacrifice. I have dear friends who are Eastern Orthodox and to them the communion BECOMES GOD in actual fact. I'm trying to understand (as much as any LDS person can) what that means for them, and in so doing reflect more deeply on what taking the symbolic sacrament means for me.

Jettboy, your posts are always so interesting and leave me with a lot to think about.

Merry Christmas to you and your family, and a Happy New Year, too!

Jettboy, Jesus' words to his mother are as stunning as the miracle.