The Keystone of My Faith 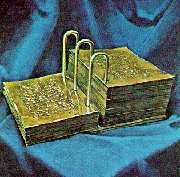 When I was in my early teens, my life was floundering between the future and a sense of hopeless dispair. Because of some problems I was having I was losing faith in myself and humanity. There was nothing drastic going on, but I was growing in anger and frustration with the World around me.

It was a typical Sunday when I unloaded my concerns on the shoulders of a friend. The discussion really didn't have much to do with God, although eventually the topic came up. Then came the ultimate question; was there really a purpose to this miserable life? The answer came as a question, "Have you read the Book of Mormon?"

Of course, as a lifelong "Mormon" I was familiar with it and read much of it with my family. Beyond that my reading was not of an intimate degree. Recognizing that the question was possibly the answer - one way or the other - I decided to read on my own from start to finish. It was a task daunting to a 15 year old, but not outside of my already brisk reading habits.

The more I read over the months, the greater my faith in my born religion. There was no burning in the bosum or spiritually blinding experience. Rather, it was a gradual realization of its truth. I was becoming enlightened. Fear was replaced by Hope. Hate was becoming drowned in Love. Understanding wiped away Confusion. I had gained Faith in a book that the vast majority of the World rejected, ingnored, or took for granted.

Beyond that I believe it ultimately saved my life as well as my soul. My contempt for humanity built up from my early teen years still boarders on Calvanistic. However, reading the Book of Mormon reminds me of my potential (everyone's potential) to become greater then the weakness of the flesh. Help is available thanks to Jesus Christ my Savior.

It is with great pleasure that I host this "small and insignificant" blog discussion on the Book of Mormon. My hope goes beyond the success of this gathering of essays. It is that those who read them go away with a love of the Book of Mormon that will make them want to take a closer look at its teachings; and live closer to the Spirit and Christ.

Reading the Book has also changed my life. I hope to encourage my children to read the Book of Mormon all the way through. I know it will help them with their trials.

The Book of Mormon serves as one of the anchors to my testimony. I look forward to what people have to say here.