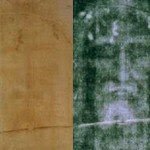 Spring slowly arriving brings Easter, a remembrance of the death and resurrection of our Lord and Savior Jesus Christ. He was slain for the sins of the world and came back to life so that all could be saved. Christians everywhere this time of year commemorate the occasion when sin and death were conquered by the love of God who watched His only Son suffer and die so that all may live. The witness of the Bible and other Scripture places these events not in some distant cosmic background, but Jerusalem in the 1st Century among a small group of Jews. Ever since that time people of faith have been searching for clues that once and for all establish the truth of the "good news" or Gospel. Some claim to have found proof.

The most famous and researched is the mysterious Shroud of Turin. It is a long cloth that seems to show the back and front of a faint figure with visible signs of pain and suffering. Hands are crossed at pelvic region to give the impression he was laid down in death. Stains that resemble blood can be found on his back, head, hands, feet, and side. Whatever the truth, it represents the body of a tortured and crucified man.

For centuries the Catholic Church has held it as an icon of faith, despite no official position as to its authenticity. Every so often it is put on display with millions flocking to see it for themselves. Other Christians have been equally drawn to its hideous charms. If real, the Shroud of Turn represents a moment in time with eternal consequences. As a fake, the method and meticulous construction still remain one of the greatest artistic achievements in history. Artifact or clever piece of art remains an open and fascinating debate.


Nobody knows where it came from or how it was created. There are those who speculate early photographic experimentation. Very few other methods would produce the amazing quality of its image. At first glance with the naked eye it is hard to see the outline of the man spread out across the 14.3 × 3.7 foot interwoven cloth. There is a faint outline on the top of the weaves with far darker spots where blood is supposed to exist. The tapestry itself is mangled along the sides by fire damage sustained in 1532 and the resultant repairs. The first photographs taken revealed for the first time the amazing details. Later photography indicated that the image on the cloth was a negative; something crude artists would not be able to duplicate in the Middle Ages. It was discovered in 1976 with instruments used by NASA to study the moon that the shroud image had 3D qualities. This is not possible with ordinary flat paintings where light and dark gradients are harder for the tools to decipher.

Other discoveries exist in its favor as an ancient and authentic burial shroud, although predictably contested. The herringbone twill is more complex than most 1st Century cloth, but not without supporting archeological finds. Samples of dirt seem to correspond with the same limestone as other ancient Jerusalem tombs. The supposed bloodstains consist of iron oxide that could be residue of hemoglobin or the chemical signature of paint pigment. Of the pollen found on the shroud, 45 were from the Jerusalem area and 6 the Middle East, although skeptics insist these were planted as a deliberate hoax. Significantly, ultraviolet photography along with earlier pictures of the shroud show flower images of species that bloom in March and April adding to the evidence of both the authenticity and the Biblical record.

Skeptical consensus, regardless of how little is known about the methods, places the Shroud of Turin some time in the later Middle Ages. This is almost exclusively supported by radiocarbon 14 dating in 1988 independently done by the University of Oxford, the University of Arizona, and the Swiss Federal Institute of Technology. The research concluded with 95 percent accuracy that the shroud was a 1260 to 1390 AD forgery. Solid as this might sound, many reject the conclusions out of distrust of the samples used claiming the material was contaminated by the damage and repairs. The scientists insist they only took from the most representative portions for analysis. This has been complicated with recent studies using infra-red light and spectroscopy with other methods to conclude a 300 BC to 400 AD date. Of course, skeptics disbelieve the findings because the researcher's close ties with the Catholic faith. And the controversy rages on.

Why any of this should be of interest to Mormons should be self-evident. Faith in God, Jesus Christ, and the Gospel are not based on the validity of a contested cloth and image. However, as Christians the very possibility of tangible evidence is tantalizing. This is complimented by the idea that mere mortals can look on the reproduction of the actual face of the savior. More importantly, it stands as a shocking and poignant spiritual reminder of the greatest sacrifice and triumph of the Christian faith. There is no need for Mormons to embrace it as an icon of veneration, but its history and importance cannot easily be dismissed. The mystery of the the shroud is reflective of the mystery of the resurrection celebrated each Easter holiday.

President Hinkley at the contested location of the garden tomb proclaimed:


Of all the victories in the chronicles of humanity, none is so great, none so universal in its effects, none so everlasting in its consequences as the victory of the crucified Lord, who came forth from the tomb that first Easter morning. Those who were witnesses of that event, all who saw and heard and spoke with the Risen Lord, testified of the reality of this greatest of all miracles. His followers through the centuries lived and died in proclamation of the truth of this supernal act.

It was announced that on Holy Saturday of 2013 the shroud will be shown on television for the first time in 40 years. The Italian station Ria will do a 90-minute broadcast featuring a brief introduction by Catholic Pope Francis. No other broadcasts outside of Italy are planned.
Posted by Jettboy at 6:36 AM