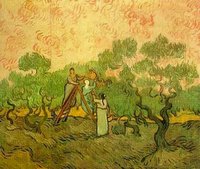 by Christian Y. Cardall of "The Spinozist Mormon"

It seems that, especially through the lens of authorized hindsight, the Restoration ends up conceptualized as a pristine system of doctrine and authority bestowed in almost prefab perfection through Joseph Smith. The immaculate textual recovery of lost “plain and precious things” suggested in 1 Nephi 13, for instance, seems to foster this paradigm. But I think Jacob 5 may be a more realistic touchstone, both in terms of how the Restoration proceeds and what exactly it is that is being restored. It also has implications for what the stance of a believer should be.

Rather than an instant, ‘just add water,’ fully-formed Restoration, Zenos’ allegory of the olive tree paints the more interesting and messy picture of an unfolding organic process in which the bad is only taken away gradually as the grafting-in of the natural branches begins to take effect. Recall, however, that at the time of the lord of the vineyard’s momentous last visit it is not only the main tree that is encumbered with all manner of evil fruit, but also the natural branches severed from the main tree and distantly planted throughout the vineyard in a prior visit.

The interesting thing to notice about this decayed pre-graft state of the natural branches is that, for those inclined to get agitated about such things, it provides a way to increase patience with certain features endemic to the Restoration that some find even worse than the surrounding worldly culture: folk magic, polygamy, patriarchy, the curse of Cain, and so on. The restored gospel is expected eventually to be the only cure for the fallen world’s ills, but because even these natural branches have gone wild before being grafted back into the trunk, they may at first contribute their own varieties of strange fruit before the good stuff begins to grow—perhaps even to the extent that, like the treatment of acne with Accutane, some things seem to get worse before they get better.

Another nice thing about thinking about the Restoration in terms of Jacob 5 is that it shifts focus away from the pursuit of correct but disembodied doctrine as the primary goal to the real prize, represented by the good and precious fruit—which, taking a cue from Lehi and Nephi’s vision of the tree of life, seems to represent a community of individuals with the love of God in their hearts. (’Having the love of God’ may of course be read in at least two ways—feeling love towards God, and exhibiting a love towards one’s fellows akin to what we imagine to be God’s self-sacrificing parental devotion to his children. It seems most fruitful to focus on the latter as a manifestation of the former, since the self-assured possession of the former with inadequate regard for the latter has led historically to much blood and horror on this earth.)

While a modicum of narrative and at least a skeletal doctrinal framework are necessary to the identity, coherence, and motivation of any group, I suspect the success of such a community depends less on getting the fine points of history, doctrine, and metaphysics right than is often supposed. There are all manner of irrelevant idiosyncrasies on display in (especially ancient) scripture, over whose emulation or explanation we obsess; there are also all manner of cosmic questions on which the scriptures are silent, which we itch to answer with our vain speculations. Perhaps such conceptual minutiae are too often mistaken for the substance of the Restoration, deflecting focus from what is really being restored: the ideal of a prophetically-led covenant community of loving individuals. The possibly varying specifics of implementation of such from age to age may simply not be worthy of sustained attention.

While ‘the facts’ may not matter as much as is sometimes supposed, authority may nevertheless matter a great deal, since the community is established and maintained through covenants that rely on authority for their administration. And this is at least partly why I can be sensitive about activist attitudes in the Church: I read our scripture and history as making a central claim that a top-down prophetic structure is essential to the establishment of a worldwide Zion. It is advertised, after all, as a kingdom of God, with the Savior as king and the Saints as subjects. The believing posture towards Mormon prophetic authority that would make sense to me is how Jim F. approaches the canon: asking questions of it not by way of confrontation or challenge, but as an occasion for its authority to speak to him, if it wishes.

To borrow a phrase from liberal Mormon hero Hugh B. Brown, it is God who is the gardener here. One can, I suspect, be a deep thinker with liberal thoughts and suspicions without feeling a need to force and fit and reconcile and be a public and active agent for change. There can be an awareness of one’s place in the top-down structure. To temporarily switch from a familiar horticultural allegory to an equally familiar agricultural parable, there can be a recognition that even if one is right and the authorities are temporarily wrong about something, pulling up the tares vigilante-style can harm a community more than it helps.

Nevertheless, there may be times when the powers that be have the facts so wrong, and the fruits are so bitter, that something must be done. In such circumstances some may be tempted to equate the pruning and digging and dunging spoken of in Jacob 5 with bottom-up grassroots reform. But that these activities are undertaken by the lord of the vineyard and those under his explicit instruction suggests instead that such husbandry is more properly identified with the ministering and course corrections performed by the legitimate authorities. No, when things are too far gone in a top-down organization, the answer suggested by Zenos’ allegory is not reform, but a new restoration, and the casting of the old into the fire. And we also see from the lord of the vineyard’s anguished deliberations that deciding between this, and sparing it a little longer, can be agonizing—for it is grievous indeed to lose a tree that represents a lifetime of investment.

Christian requested that the comments be closed. Please direct any responses to his blog.Thanks.